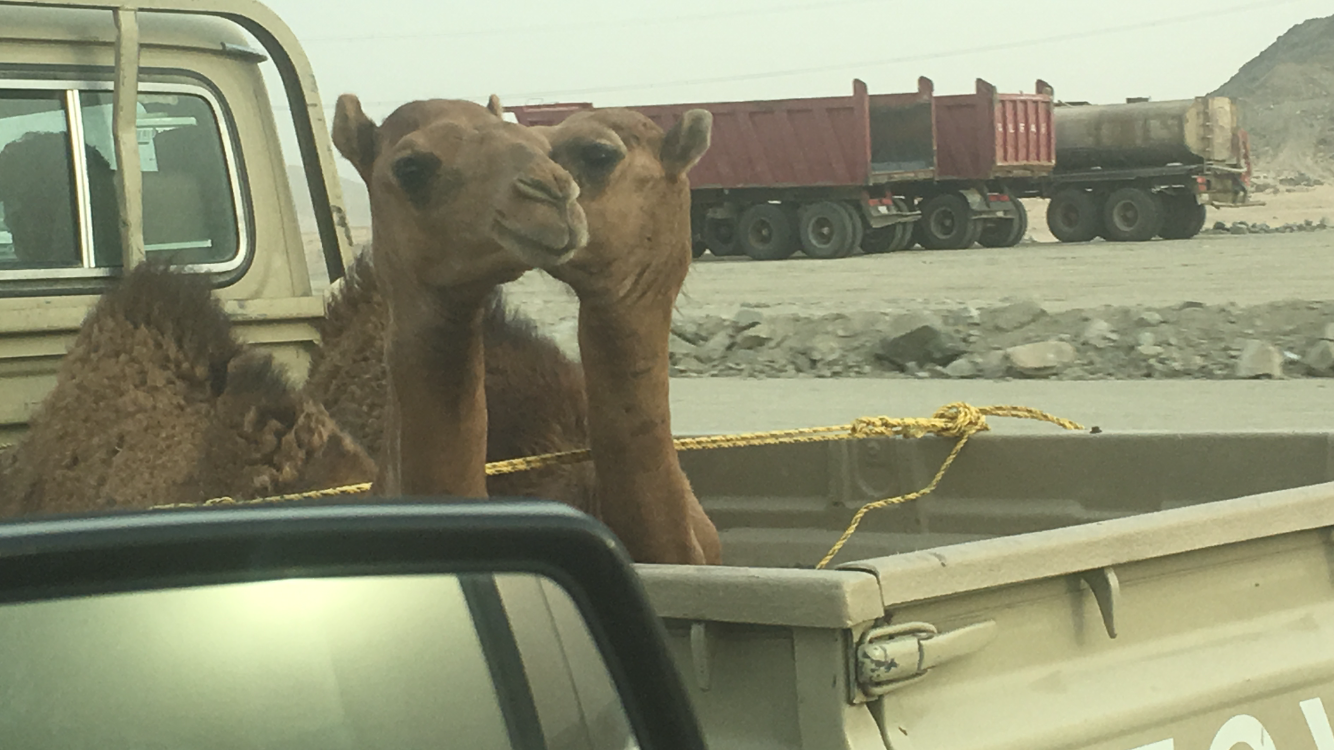 In the early Summer of 2016 I was invited to take part in the training of English speaking nationals living in Saudi Arabia who had volunteered to work on the Al Mashaar Al Mugaddussah Metro Line better known as the Mekkah Hajj Railway. I immediately accepted and then learnt that I would be in Saudi Arabia for 10 weeks instructing and practically testing the volunteers and also taking part in the emergency exercises connected to the yearly opening up of the railway as well as the trialing of a mobile phone App for the leaders of Pilgrim Hajj groups. The challenge sounded fascinating especially as I am a fan of the movie Lawrence of Arabia and am always up for a new and fascinating challenge.

The group that had been assembled in Hong Kong consisted of about eight ex MTR managers and six ex-Hong Kong Police Force officers, all of which had at sometime in their careers undertaken instructional duties. The group had been gathered together by a Hong Kong company who would lead the venture in terms of administration, logistics and would undertake an interface role with the Saudi Arabian Authorities. The trip out to Saudi Arabia involved a flight to Doha and then a flight to Jeddah in Saudi Arabia followed by a three hour car journey to Taif and the Awaliv International Hotel which would serve as our base.

On arrival and after grabbing a few hours sleep we were driven 60Km from Taif to the Umm Al Qura University on the outskirts of Mekkah which would be our base for utilizing our instructional experience to give lectures. The trip to the university involved a drop in elevation of some 4000-5000 feet which made the car journey with its many switchbacks quite an experience. The opening address by the Hong Kong Company CEO laid out the size of our task namely the instruction of 3500 foreign nationals who spoke English living in Saudi Arabia consisting of Pakistanis, Malaysians, Egyptians, Indonesians and Filipino and others. At the same we were carrying out our instructional duties to the 3500 English speaking volunteers in two cohorts namely: Station Platform Procedures followed by practicals and then the Station Waiting Area Procedures and practicals there would also be a group of Arabic Instructors giving the same lectures in Arabic to 3500 Saudi Arabian volunteers.

It is of note that one of the Five Pillars of Islam is that those of the Muslim Faith must give service by volunteering to assist their brothers and hence helping prepare volunteers for operating the Mekkah Hajj Railway was a substantial volunteer undertaking. The Arabian instructors were all highly qualified professionals such as doctors and engineers who worked during the day and then undertook instructional duties between 17:00 to 23:00hrs and it must be said that a good rapport with the instructors from Hong Kong was soon struck up. A drive out to the Mekkah Hajj Railway was arranged for the purpose of orientation and familiarization. The railway only ran for 20 Km and had nine stations namely Mina 1,2, and 3 (Jamarat), Muzdalifah 1,2,3, and Arafat 1,2, and 3. It was of note that nearly all stations were the same design with a ground level queuing area that led to six ramps up to the station platform with each ramp capable of holding 500 pilgrims each for a total of 3000 pilgrims. On reaching the platform there was a platform holding area 300 meters long that could accommodate 3000 pilgrims. This area was segregated from the platform boarding area by screens and automatic doors which when opened allowed the 3000 waiting pilgrims to move forward to the platform boarding area after which the segregation doors closed allowing no further access. The platform boarding area was separated from the track and train by the platform edge segregation doors which when the Hajj 12 carriage train pulled in and stopped, would allow the doors to open and the waiting 3000 pilgrims would board the 12 carriages with 250 pilgrims per carriage. At some stations there was only one platform to board the train before which passengers would leave the train from the exit platform. When the railway was fully utilized it could accommodate the movement of 72000 pilgrims per hour.

As stated the Hajj railway only operates for the week of the Hajj during which there were various train movements with the busiest day being when pilgrims go to Mount Arafat to pray all day and Stations Arafat 1,2 and 3 were busy. At the end of prayers that day pilgrims would go to Muzdalifah 1,2, and 3 to stay overnight to collect stones which they would use the next day to stone the devil at the stoning wall near Mina 1 station better known as Jamarat Station. It is of note that of the three million pilgrims undertaking the Hajj about 400,000 pilgrims were allowed to use the Hajj train. Furthermore training undertaken in respect of the Hajj railway station platform and ground floor waiting areas had to include Standard Operating Procedures (SOPs)to cover people who had never been on a train or used automatic doors.

The working week was six days with Friday off, with hours or work being from 15:00 to 01:00hrs. Lecture preparation was undertaken in our hotel rooms after breakfast taken as early as possible to avoid the crowds that used the hotel for breakfast as many Saudi Arabians were on holiday and Taif was popular because it was at approximately 6000 feet and had a cooler climate. The hotel backed onto a shopping mall which had an array of shops and fast food outlets. However on some Fridays we couldn’t get access as the religious police sometimes made the complex for families only. When this happened we soon discovered a number of restaurants in Taif that sold good food and were welcoming. Another thing that we had to get used to was, all women were covered from head to toe in their burkas and if a lift in the hotel arrived with one or more women you as a single man had to wait for another lift.

Training for the platform waiting areas and protocols to implement if there was an incident or accident soon commenced and as a lecturer you had to be adaptable as all students had worked during the day and arrived at the start of the lecture at different times. In addition, to this there were two prayer breaks of 30 mins as Muslims pray five times a day and at the end of the night there was a multiple choice exam which had to be marked and results given out for up to 100 students per class. The lecturers operated a system of “No Man Left Behind” and if a student was struggling to achieve the pass mark, they would be given extra tuition that in nearly all cases saw them pass the exam. There was a small gap between the lectures and practicals which we made the most of to visit Jeddah, the Red Sea and the mountains outside Taif. During the practicals we were outside the air-conditioned classrooms. However, the timing of the practical had them starting just before sunset until approximately 23:00hrs with prayer breaks. It was during the practicals that kinship was built up with the students and some Arabic phrases were learnt including Yella, Yella, Yella or Faster, Faster, Faster! At the end of the station platform practicals we had a visa run to Dubai where we had the whole day to visit landmarks such as the Burj Khalifa or chill at the Atlantis Water Park. There was even time to have a quick beer especially as Saudi Arabia is an alcohol-free country with such drinks not being carried on airplanes leaving or entering Saudi Arabia.

After the visa run, the waiting area lectures and practicals took place. During which, it was obvious that the Hajj Railway was being made fully operational after it had been in moth balls for nine months. Immediately after the waiting area practicals we went on our second visa run to Dubai although on this occasion we only had 12 hours in Dubai before flying out mid-afternoon.  On arrival back at the Mekkah Railway all the major exercises took place with full turnout by Saudi Arabian fire, ambulance, police, other emergency services and special forces. These exercises ultimately ended up in the commissioning exercise for the start of the 2016 Hajj. Immediately after this we took up our command room duties for our contingent and also undertook some pilgrim group leader mobile App development exercises to ascertain how effective the App was in terms of positioning, especially when indicating boarding and exit platforms. After the Hajj week our work was complete and all that had to be done was to hold our leaving dinner and return back to Hong Kong after quite an extraordinary 10 weeks.

Social identification moderates the effect of crowd density on safety...