Touch Base on planning Event Security

Touch Base on planning Event Security 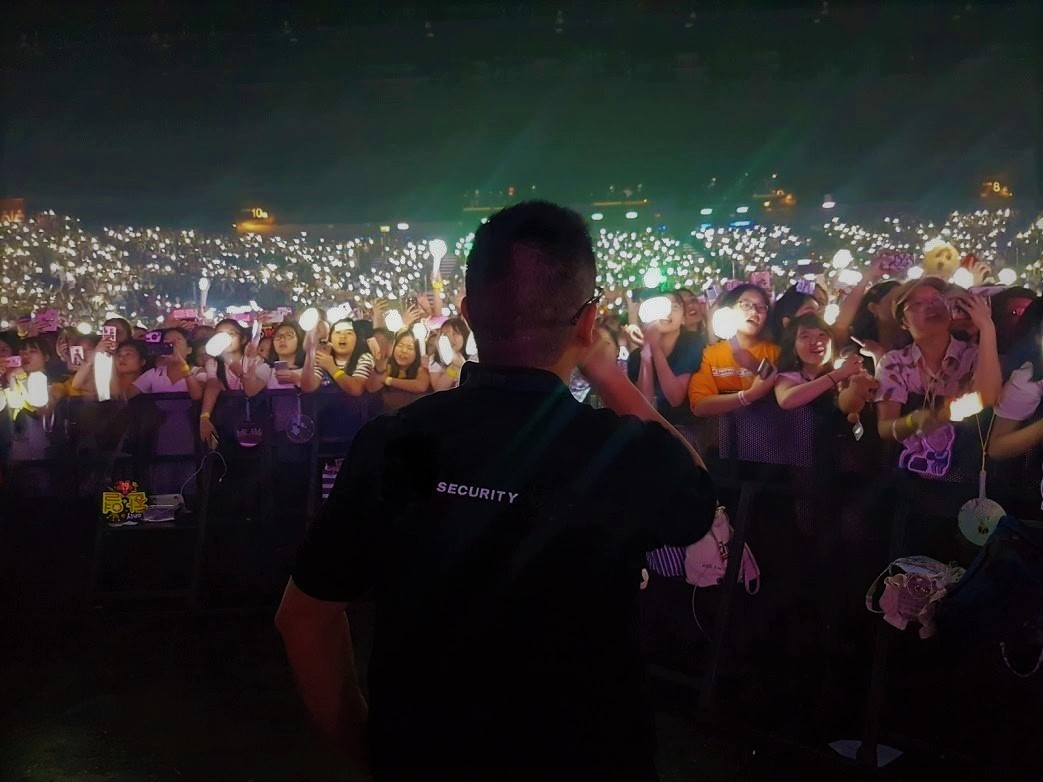 Planning Event Security to the vast majority may mean preparing for the crowds attracted by an activity as part of their daily security routines, but to the concerned it is a high-level task over Venue Security.  The differences are attributed to the sizes of crowds, varying from hundreds at a shopping arcade, to tens of thousands at a mega venue, and even to millions worshipping at a holy site in the Middle East.

This article only touches on the type and level of event security that might take place in mega convention centres, exhibition and concert venues in this international city of Hong Kong and the nearby cities of Macau, Shenzhen, Zhuhai and Guangzhou.

A great variety of events are commonly seen in Hong Kong; from conventions and trade shows, to concerts, mini-car racing, rugby and soccer matches, polo sports, carnivals and music festivals taking place both indoors and outdoors.

In Hong Kong, crowd management of all public order events (POE) of up to millions of people falls under the duties of the Police Force.  Event security in private places rests with the venue management or security companies.  Police assistance can be summonsed if an event gets out of order or unless an event has POEs or threat of crime issues in which case police will be involved from the outset.

Event Security is more dynamic when differentiated from Venue Security; the latter is relatively static and takes care of everyday duties such as patrol and building control.

There are basically three stages in the work of Event Security, from Planning, Execution to Wash-up.  When an event is about to go live, it is the event security team who should meet the event organizer to ascertain what the event is all about and then undertake in-depth research into aspects like past history, security risks and threats and gather as much information as needed from various sources, e.g. Social Media, to see the audience trends.

The stage design and the zone layout plans should be ready for examination as early as possible.  Backstage security will become a loophole without careful planning and must be integrated with front of house security especially at the boundary of responsibility of both zones.

It is advisable that the November 2015 Paris attacks at the Bataclan Concert Hall and Stade de France as well as the May 2017 Manchester Arena concert bombing (see quick references) must always be borne in mind as an underlying principle when planning for the worst.

There are certain parameters that should be taken into account in helping to tackle security problems always associated with an event.  Undoubtably the budget for security has much bearing on the outcome of an event, notwithstanding the risk matrix from which it is derived the event may be highly critical.  Though fatalities and casualties are unlikely in most events across the world except those with terror attacks the motto, ‘Failing to Plan is Planning to Fail’ always stands.

Key factors in planning event security are event nature and size, weather forecast, value of exhibits, event’s world history, number and profile of visitors and so on.  A political or religious event now has higher risks than ever before, not just in Hong Kong but many other countries around the world.  Hostility may end up with charging security officers and attacking other patrons.  High valued exhibits inevitably attract crime.

Inclement weather is crucial to open space events both inside relating to crowd dispersal and outside as to the transport arrangement to and from the event.  Chilly weather made comfortable by thermal comfort has a totally different meaning when compared to sunny, hot, stuffy, rainy and stormy weather, and poor air-conditioning alike.

It is worth studying an event’s world history in particular fatality and casualty, and considering the experience of a world tour with the locality, local security risks, concerns, legislations and audience profiles.  Arrival of timely decisions from event organisers is an important factor to the security and safety of an event.  Sometimes pyrotechnics and/or gimmicks are used, or the singer has an idea and wants to come closer to and invite a hug with fans by jumping out of the stage.  These would upset original plans and may have to be counter-offered.  Audience behaviours should also be of deep concern especially when drunk, heated and agitated.  Alcohol drinking, dancing, smoking, drug-taking (and sometimes trafficking), smoking coupled with sitting on shoulders, standing on seating zones, crowd surfing and undressed on upper torso may eventually turn into chaos - fighting, indecent assaults...  These are all detrimental to the quality of an event and possibly catastrophic as in a crowd crush followed by domino effect such as the 1993 Lan Kwai Fong stampede or in the 1985 Bradford City stadium fire (see quick references).

Precautionary measures are therefore necessary, such as deploying first aiders, body guards and special task force to handle difficult and dangerous situations.  Security screening is widely adopted to detect contrabands like weapons, explosives, narcotics and inflammables.  AI-enhanced video analytics should be able to spot suspicious or targeted persons and their routings as well as undertake people counting to aid crowd management.  Basic security equipment shall include large and clear directional signage preferably with programmable electronic displays, and fencing facilities such as cordon tapes, stanchions, mills and mojo barriers.

Crowd management tactics should be applied during influx and dispersal, where tidal flow, queuing, zoning, sterilising identified by wristbands or watermarks, emergency vehicle access, refuge area, on-site and online information broadcast have proven effective.  Transport operators and emergency departments who may render logistical support and rescues have to be pre-planned for the worst-case scenario.  Empirically if not ideally, Security to Audience ratio is 1:100 and the density per unit area is 8-10 people per square meter.

An Event Operational Order must be in place when going into the execution stage.  Operational briefing and final briefings should be the best top-down communication tools.  There are four key elements (4Cs) in the operational order, namely i) Command, ii) Control iii) Communications and iv) Contingencies.  It is stressed that communications should make use of all communication means to reach all stakeholders, crowds, passers-by and on-lookers.