A brief study on Security Screening in Hong Kong 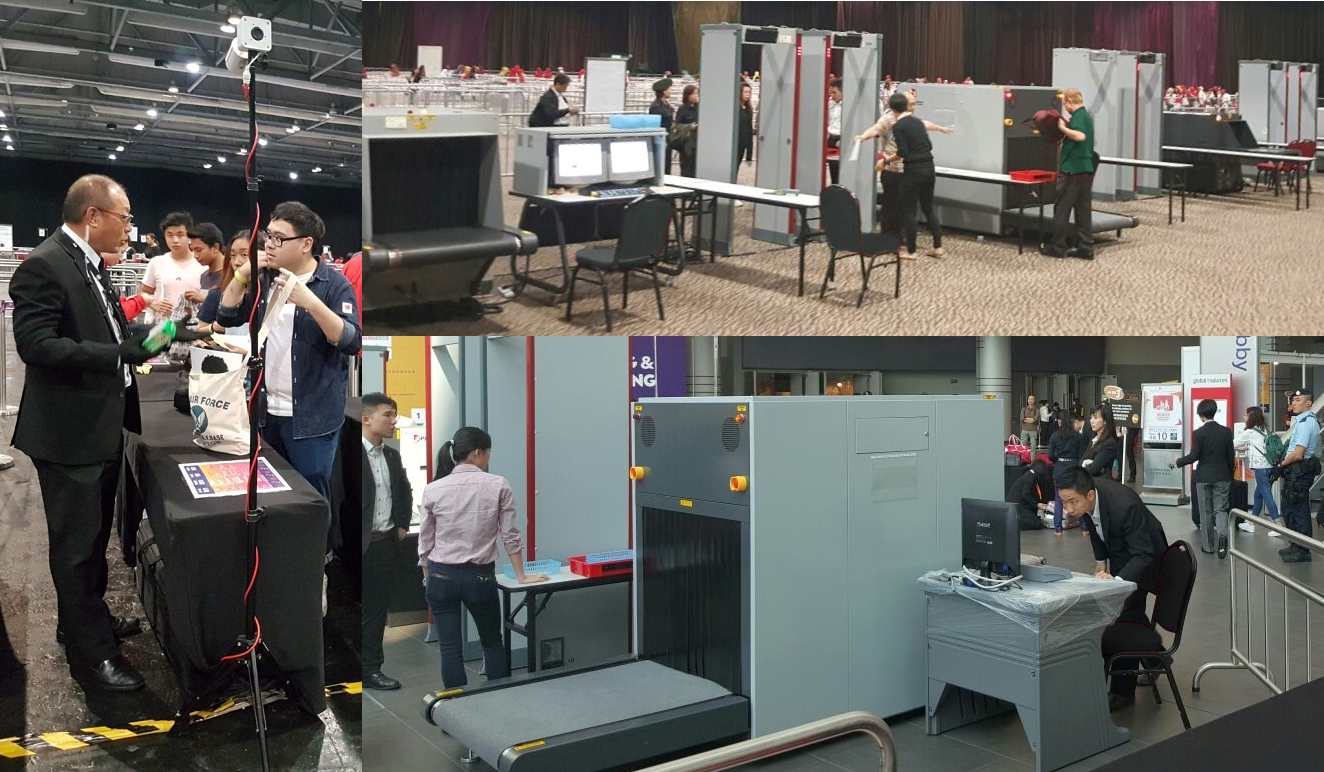 This article briefly and generally (definitely not exhaustively nor scientifically) walks through an important, yet unpopular, part of security operations – Security Screening in private and public sector applications in Hong Kong.

Hong Kong SAR Government’s Security Bureau has long been grading the risk of Terrorist Attacks as relatively low, and the chances of using Chemical, Biological, Radiological or Nuclear (CBRN) weapons are even lower.  This might explain why security screening is not pushed as hard as in many other countries including our neighbouring Mainland China like the setup at Train Stations nationwide.  However, the 2019-20 Hong Kong protests should have alarmed those security experts and consultants here to reinforce the protection of premises and properties by Security Screening, on top of cladding or setting barriers to deter sabotage.

In most of the cases and to a certain degree Security Screening presents inconvenience if not nuisance, and as well jeopardises privacy.   But when screening measures are to be mounted due to extra high risks, one has to get well prepared for deploying both screening equipment and personnel to fit the purposes.

In the wake of the Paris attacks in 2015 and the Manchester Arena bombing in 2017 which saw serious fatalities and casualties, it also prompted a lot to be considered and done by all those involved in security management and planning around the world.  Such deadly acts were well planned and organised.  It was shortly afterwards that AsiaWorld Expo (AWE) in Hong Kong uplifted its security for concerts and special events to the highest level in the local private sector’s history to screen out suspicious and offensive subjects and items.  There, apart from X-ray and other electronic devices, sniffer dogs were deployed for searching explosives.

Security screening is aimed to detect contrabands such as weapons, firearms, explosives, narcotics and inflammables, hidden in liquid containers, parcels, baggage, goods, clothing and even human bodies.  It is also to stop suspected or targeted persons from entering restricted areas or specific zones, or crossing cordon lines.

Basic security searches start with visual inspection coupled with hands from ‘pat down’ to more detailed body searches.  In the private sector, armed guarding with Remington shotguns can be an option if high-value exhibits are of concern.    Those sniffer dogs raised by civilians, are trained to sense (smell) explosives or narcotics despite the fact that the explosives/narcotics range detected by any sniffer dogs is limited.  Yet there could never be full-range actual real samples available like there are for the Police and the Military.

Two types of Metal Detectors commonly found in the market are Handheld and Walkthrough (Portal), which detect metal objects (ferrous materials) typically under clothing, by generating a magnetic field.  The handheld type alone requires one security officer (Searcher) each to handle and can be used in conjunction with the walkthrough type without extra manpower being needed.  Modern development of the walkthrough type breaks down the portal into minute lateral and longitudinal zones to narrow down the exact locations for much easier and quicker identification.

Explosives and narcotics may be identified by their traces (particles) on subjects, be they human skin, clothing or belongings, or otherwise air-borne (vapour) by way of suction.  A tiny piece of dry test paper (cloth), one at a time as a consumable item, is used to collect samples by surface wipe or in the air.  The sampling test is achieved by analysis in a vacuum by an ion mobility spectrometer for a few (up to approximately 8) seconds to determine whether or not the substance is of explosives or narcotics.  Trace detectors should be placed inside a positive pressure air chamber to prevent contamination from outside and have self-cleaning facilities.  Portable type is also available.  Dual mode operation to test explosives and narcotics simultaneously is more ideal.  Trace detectors should be able to analyse and learn any (including new) explosives, narcotics, toxic substances and warfare chemicals by their chemical composition and formulae and in their nanograms, proven by test certificates from approved or internationally recognised laboratories.  There are tens of known explosives and narcotics, most commonly heard in Hong Kong are: Trinitrotoluene (TNT), Triacetone Triperoxide (TATP), Ammonium Nitrate, Hydrogen Cyanide, Cocaine, Heroin, Amphetamine, Morphine and Ketamine.

The sizes of X-ray Scanners range from letter, parcel, baggage, luggage, cargo, air pallet to container truck.  X-ray scanners are both ionizing and emitting high energy.  Advanced models distinguish explosives and narcotics from other substances and objects.  Inspection views are available from single view (horizontal or vertical) to dual view (horizontal and vertical).  Prices are much higher when using multi-technology dual energy coupled with dual monitor to detect organic substances (explosives and narcotics), regardless of purposely shielded by metal plates.  Air transport organisations (ECAC, TSA, ICAO and CAAC) ever sets the highest standards for aviation security, towards which Computed Tomography (CT) which outputs animated three dimensional (3D) images and as such has become the ultimate technology to be used with X-ray Scanners and other uptrends in security screening applications.

A full-body scanner (non-medical) displays hidden objects on a standing human body, from 360 degrees and without physical contact or removing clothing, over computer-regenerated and animated pictures of the body as if seeing a heat map thereof.  Unlike those X-rayed, non-ionizing electromagnetic radiation is unharmful and transmitted from the source onto the subject body which reflects various intensities, due to profiles of objects carried, to the receiver.  This is with ‘Active’ transmission and analyses ‘Reflective’ waves.  The other form is ‘Passive’ which measures the level of energy radiated from different parts of the body.

Trace detectors, dangerous liquid detectors and radiation scanners all need Operators and Technicians who should best receive technical and radiation training provided by manufacturers and approved agents.  Radioactive equipment or irradiating apparatus are governed by the Radiation Ordinance, Cap 303 Laws of Hong Kong SAR, the licenses of which are administered by Radiation Heath Division of the Public Health Department for control of radiation safety in import and possession.

Video Analytics nowadays provides a form of security screening in terms of business intelligence in tracking and narrowing down suspicious or targeted persons by their age groups, genders, ethnic groups, numbers, dresses, routes, motions, belongings and past records, aside from facial recognition.  Video analytics is driven by Artificial Intelligence (AI) and will receive software updates (new data) from time to time and can be readily deployed in those areas covered by Video Management System (VMS) together with high definition (HD) cameras.  For facial recognition, such personal data are encrypted for processing, stored for a lawful period, and cannot be turned back to human recognisable faces for privacy sakes.  Considerations can be given to place Security Robots built in or added with cameras for remote video surveillance at checkpoints to aid security screening

The writer is of the opinion that Security Screening in Hong Kong has hitherto not been a hot and top issue to draw and receive due and full attention, at least over the private sector.  Few good case examples of security screening can still be found in the public sector imposed by government agencies in the event of head of state or military fleet’s visits.  Newer and more advanced technologies always evolve, like the introduction of body temperature measuring elements as a security measure at the time of Covid-19 pandemic.

Along with the rising global standards and measures to cope with terrorist attacks and the like, the right levels of security screening are to be planned and determined commensurate with various risks and threats.  Security experts and protection professionals may now enhance the Security Manuals in respect of security screening, develop standard operating procedures (SOPs) and come up with new budgets for the actual situations and needs.  Security screening requires extra manpower and equipment and a trained sniffer dog is to be with a handler.  Screening instruments and equipment cost from tens of hundreds to hundreds of thousands of HK dollars, not counting the costs of manpower and others during operations.

Notwithstanding terrorist attacks from outside Hong Kong are somehow unlikely, the recurrence of civil unrest and the rise of serious crimes involving improvised explosive devices (IED) are indeed probable; it is thus time to promote the discussion of Security Screening in preparation for the worst.